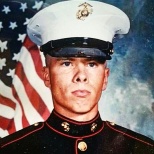 Stan trainin Abbey to be a Frisbee champ!

My last blog was about hate, this one is about love. And I’m well-endowed on the love front as well. I want you all to meet my best friend and the best ally ever, Stan. We share our life, our home, and our values. (And, boy, is it ever great to have a Marine combat engineer on your side!) Having support at home in resisting Trump is a gift. Especially in the one you love.

OK, so, yes there are some incredibly practical aspects to having someone like Stan when you live in a house that’s 130 years old with land. I know he’ll also keep me safe, and always be there for me, but it’s his goodness and humor that truly shines through to me.

Here’s a guy who served his country during wartime, and has never viewed himself as “political,” but suddenly he’s become the Bruce Lee of social justice. As he says, “I’m white and male and a Marine. I’m going to let my freak flag fly!” And he has.

Since the election, he has been exercising his status for good. He got laughs and applause at a local convenience store when he said to the old white woman screaming “Go back to your own country!” at an young hispanic lady, “Well, you must be the whitest Native American ever.”  Because, seriously, people standing in line the Friday before Christmas, waiting to pay for gas and cigarettes really just want to get out without being screamed at or hearing a crazy person screaming! So score one for team decency.

On Inauguration Day, which I can hardly believe is only last Friday — seems like a million years! — he stopped by the grocery store that sells beer (that’s a big deal in PA), and he noticed an older black woman actually sitting on the curb in the parking lot, in the rain, crying. So he stopped and sat with her for a bit, and let her talk out her fears and sadness. Even though they both acknowledged the weirdness of a white dude giving this woman, who despaired of a lifetime of struggle with both black and women’s rights, some human comfort.

Firstly, I cannot believe that we have come to this point as a nation — here in the US — where people are openly weeping in public over their fears of the election of that alternative-fact, Alt-Right, Russian supported, greedy, pussy-grabbing, Manchurian Candidate Trump. But I am heartened by the millions who marched in the Women’s Marches and Sister Marches ALL OVER THE WORLD, and the zillion anti-Trump and commiseration groups on Facebook, right there with that woman on the curb, and myself. Never have so many suffered so much for so few. And it’s good to know there are some who should, in theory, be on the other side, out there performing random acts of decency.

We all need to know we have each others’ back! No matter what. Whether in the marches, in the groups, or simply in a grown up Boy Scout who happens by. He even challenged a guy talking about “fat chicks” in the marches just yesterday. In a way it’s odd, but it’s really about Allies and support. And it makes all the sense in the world. There are plenty of white males out there who hate Trump, and I’m glad they are using their privilege to help oppose him. It’s a lonely world, and we all need to be each other’s support. Intersectionality is Unity is Power.

So, I’ll keep ‘splaining the issues, and keeping my voice strong, practicing my action lists,  but I’m beyond grateful to have my best ally right here with me. I know a lot of women don’t have that in their other, and I acknowledge that I’m fortunate. He gives me hope and strength and laughter. And that matters as much on the personal level of daily interactions with real people as all the Facebook groups ever.  Everyone should have a Stan. Who is yours?

Jessica Lakis - Writer/screenwriter. Geek & mental health blogger. Conqueror of the Useless. NERD INVICTA! END_OF_DOCUMENT_TOKEN_TO_BE_REPLACED
This entry was posted on Thursday, January 26th, 2017 at 11:20 pm and tagged with allies, love, LoveTrumpsHate, Resist and posted in blog, Uncategorized, writing. You can follow any responses to this entry through the RSS 2.0 feed.
« #currentmood #inauguration #fuck
How to Make an American »