Anger dominated 2020. Yes, there is sadness, fear, anxiety, and loneliness, but rage ruled the US this year. Rage over Coronavirus, rage over the deaths of black Americans. Under a leader consumed in the fire of rage, we only speak in anger. But whose anger matters? Depends on how much you matter.

Sometimes described as “anger turned in on oneself,” Depression is the sense that you are the problem. You don’t have the right be angry. My abuse taught me that I didn’t deserve to be angry. That I was so worthless, I had no right to feel what I felt. Or to even think as I thought. As a consequence, that anger has built to Vesuvian proportions. And then I blow. Only recently, have I even begun to address this issue. Only recently have I realized I have a right to be angry at all.

2020 was also a year of skyrocketing suicide and overdose deaths — Deaths of Despair. The only way to prevent those deaths involves breaking down the barriers in social status that keeps the voices of the desperate and despairing from ever being heard.

The only forum I have to express my anger is this blog. I am literally nothing in the grand scope of human value based solely on money. What status my earlier work has gained is losing its lustre over the years. And I can barely speak what is in my mind and my heart. But I HAVE to write now.

I hope 2020 is the low point in American life that brings attention to those of us slipping through the gaping holes in our social safety net. We live with the end results of 40 years of “Trickle On Economics.” And the attitudes that accompany it. The poor are poor because they want to be. The government should have no role in mental health, or any healthcare. The ruinous war on drugs. The “tough love” of the 90s — a time that fully endorsed the shaming a 22 yr old woman who was seduced by a President, while those with mental health and drug and alcohol issues were locked out from their families. And now, Poverty and Food Insecurity has reached the lower rungs of what remains of our Middle Class. The Sheriff is knocking on the door to evict. The Repo man. The mortgage companies. While our government does NOTHING to help.

If you still think that you are beyond the “trivial” fears for food or shelter, you are holding onto the greatest American lie. That with hard work, and persistence, things will work out. The world is random, and you’re as subject to the whims of fortune as much as anyone. I hope you’ll never know how much.

I have persisted in trying to help myself. I’ve encountered sexism, and the stigma of poverty and mental illness in every area of my life. And meet a general attitude of “I’m alright Jack. Screw you,” at the best of times. At the worst, silence. And I know I’m not the only one who is barely keeping it together. But that doesn’t help anyone.

I practice the self care. I practice meditation, mindfulness, and yoga. I eat healthy. I get outside when I can. I find ways to make do. And, yes, I am grateful for what I do have. I’m not some Main Line lady keeping a Gratitude Journal whilst holding a vase and wondering if it brings me joy. I’m thankful I have 194$ in food stamps for the month, and somewhere to live. How small and meager must that which I’m grateful for become? “I’m grateful I found rubber glue to fix my shoes.”

I have had enough of those who pretend to be there to help. Especially in mental health care. As an experiment, I joined a Facebook group of psychiatrists and psychologists. One man suggested that I had “sand in my vagina” and that I might be pregnant. Another woman accused me of not wanting to work. Ya know, because having $1.11 to your name is SO MUCH FUN! Constantly begging reluctant providers to sign forms to allow me to keep Medical Assistance and SNAP, filling out paperwork to prove I’m poor and need help. This is such a joy I should put it in a gratitude journal!

In the end, I was kicked out of that forum when I mentioned how easy it would be to include those providers’ statements in Google reviews of their businesses. Silly me.

I know my voice means nothing. I know I mean nothing. I know I’ve been taught that. And, literally had it banged into my head. To the extent that I have traumatic brain damage, and crowns for front teeth. I know that everything I say is construed as an attack by those I love. I know I’m annoying and getting in everyone’s way. That no one knows how to handle me. And even my interests are considered beneath contempt. I mean, you know your thoughts are worthless when an interest in history is tantamount to criminal behavior.

Yes, I’m angry. And very sad. And problematic. But I know, simply as a human being, that I am worthy of better treatment. I’m simply not important enough to be cared about. And I’m not alone. So be truely grateful you can become infuriated by a state wide restaurant restriction. Be thankful that a late Amazon delivery is your main cause of distress. Or maybe look deeper, and see what’s really upsetting you.

All this time I cling because I have no one else to go to. I have no where else to go. Submit or literally be left in the cold. That’s what’s enraging me. Too bad I’m not important enough for it to matter.

While you’re here: check out the wonderful work done by the people at The National Alliance on Mental Illness and donate.

Check out my Instagram! There are pictures of stuff!

“Jesus! I feel like my entire life is a protest now.” “That just means we’re free, Sis.”

Trump is a plague. He has mastered inspiring fear and rage. Not just in his supporters, but all over the globe. And certainly in myself, and most people I know. My therapist told me that the number and intensity of reports by clients regarding Trump is a phenomenon. Possibly even an emergent disease. So, he literally is a plague on humanity. So what do we do, besides suffer in fear and anger and hopelessness? What can we do?

I have a fascination with plague. It began very young. Maybe it was the first time I realized that something scary and dangerous can swoop down on me and my family at any moment, and with no “why.” That there is no cosmic purpose behind the suffering caused by disease, WWI, The Holocaust, or Donald Trump. Suffering has reasons, but no “Reason.” We give these events meaning in hindsight. And our reactions and actions during times of suffering give meaning to our lives and experience. It’s tempting to believe there is a form of “cosmic justice” to it all. But in the end, real people with lives and family died in the camps, while Hitler got off with suicide. People brought the Nuremberg Trials, not the cosmos. The Universe doesn’t care about Earth, or one single species. People must bring the meaning AND the justice.

So, what to do? What to do? Well, I read The Lord of the Rings three times in succession since the Election. And while that book has spiritual influences, it comes down to the individuals involved to each do their part to bring down Sauron, even the trees! And here we all are, so many reluctant heroes, wishing for the Shire and a big, wise Gandalf to hug, but this isn’t Middle Earth. And the winning of the War of the Ring had a lot of casualties, from the Elves, to the trees, to Frodo himself.

Tolkien has more in common with other post WWI and WWII writers than his fantasy war suggests. Today we’d call it PTSD. Seems to me the man was so traumatized by his experience of WWI that he invented other languages just to express his thoughts and feelings . But some authors used more common-place settings. In The Plague, Albert Camus set his story in a place so ordinary that it could be anywhere. And the characters could be any one of us.

The “heroes” in The Plague are a motley crew, like The Fellowship of the Ring. There’s Doctor Rieux, who just doggedly pursues his work while his wife is away for a tuberculosis cure . The political undesirable, who gets stuck in the town while on the run, and becomes the Doctor’s best friend. The guy who is motivated to be reunited with the woman he loves. And dear old M. Grande, the minor civil servant, who works tirelessly on his “great novel” by night, as he goes out of his way to ensure that The Doctor has everything he needs, and whose life (and great novel) are at last saved by the Doctor’s successful serum.

While much of the town in The Plague is dying of disease, the rest is taken over by hopeless drunken revellers, angry mobs attacking the poor, African section of the town, fear-mongers preaching God’s wrath and judgement, profiteers, and suicides. The sane characters — the heroes — are people who have accepted that the worst may happen to them. They too feel fear, anger, despair, but they choose to simply be decent human beings anyway. They all play their little part for both their own reasons and a common goal: ending the suffering caused by the plague and freeing the town from its quarantine — its fear, anger and despair. Their very existence is a protest against the inhumanity of suffering and a world turned upside down. Their lives and work together are a testament to Gandalf’s assertion that:

“Some believe it is only great power that can hold evil in check, but that is not what I have found. It is the small everyday deeds of ordinary folk that keep the darkness at bay. Small acts of kindness and love.”

There is a touching passage near the end Camus’ book, that describes why Doctor Rieux recorded the events of his experience during the plague, down to the detail that, amidst the tearful reuniting of loved ones after the crisis, his wife never returned from her “cure.” The quote has been honored with a plaque in New York City, on Library Way (East 41st Street between Madison & Fifth Ave.). And I will leave that here for reflection. 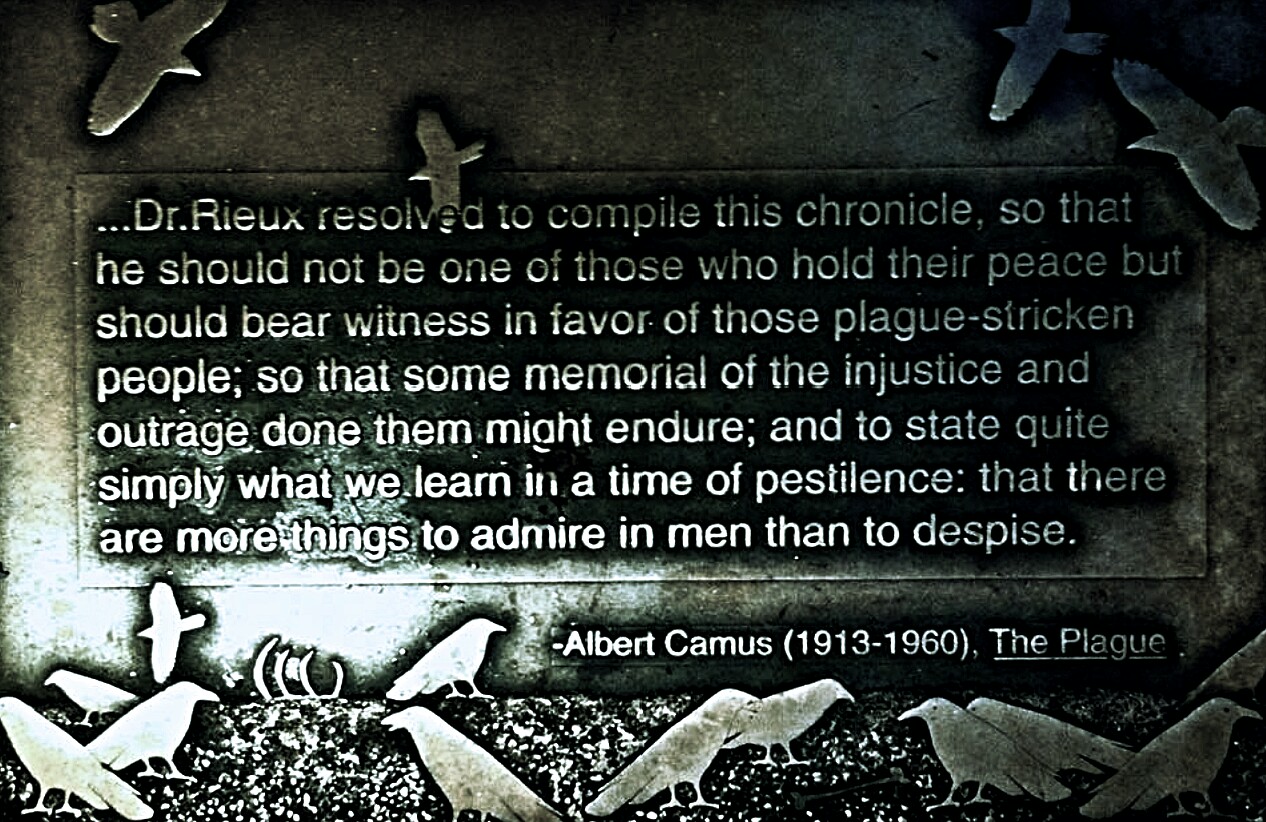 Let this be said of all of us, when the story of this time of plague is written.

Whatever your method or motivation, never forget those who suffer, bear witness, and choose decency. That is how we defeat the plague of Trump, anger, fear, and despair.