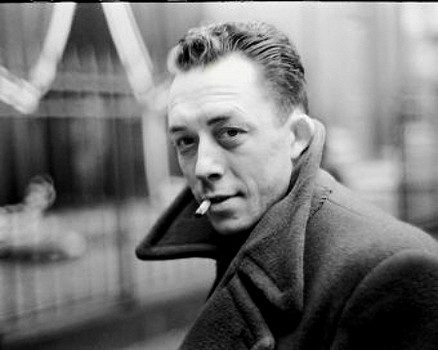 Probably ought to have qualified my announcement that I have the Plague. I call any illness plague because I’m really into the plague. It’s true. Goes back to my childhood and my Dad. I remember being about 15 when he threw Camus’ book at me with the statement, “Read this if you want to understand human nature.” (It was a soft-cover.)

He considered himself a “Beat”.  He had returned from Korea and went to art school in the mid-50s, so that was his era. He explained to me that because he could never learn everything, read every book, go everywhere, and do everything in his life, that he was beat from the start. He tried to give me a better shot than he had.

I remember when he’d play music or a movie, he’d shout in his 1st Sergeant way “Listen! Listen! Listen!”,  “Pay attention!” and “Focus!” at the climatic moments of say: Pavarotti’s Nessun Dorma or The Beatles’ A Day in the Life, or at that iconic bone to space station cut in 2001. I found it irritating at the time, but I did develop the habit of listening,  paying attention and focus.

The result has been two-fold. First, I learn fast because I’m paying attention. But dear me, it’s never enough. Now I have to learn everything about everything I learn about. But you know what I’ve realized? I’m beat.

One person simply cannot learn, master and do it all. It clutters the “brain attic” and diverts attention. At some point you simply have to accept not knowing, not being the best and not giving a damn. So you have to give up on some aspects of life, the Universe and everything. You have to choose what matters. You cannot care about it all.

In Camus’ The Plague we find characters quarantined in an isolated port town on the edge of North Africa surrounded by only desert and sea. They have limited choices in the face of the hand life has dealt them, bubonic plague (because sometimes life just sucks for no reason).  Some people use the chaos for their own benefit, some have internal limitations that keep them from doing as much as they could, others rage against the unfairness of the situation, some try to keep up appearances. But eventually an odd kinship grows up around a Doctor and a group of misfits who are willing to put themselves out there in whatever capacity they have to fight for the life of their town and its people.

My favorite character is M. Grand. Grand is a low-level civil servant, but the only person still willing to do his job after all the other officials have either fled or died. He keeps all of the statistics by neighborhood, issues necessary permits and generally keeps the town running.  All while continuing his secret labor, working on his great novel. He carefully re-writes its first sentence every day. He tells the Doctor that he’s even gone back to the original Latin roots of words to get at their essence. His apartment, bereft of love since his wife left him, is full of his notes for his life’s work. His dream is that one day he’ll submit to a publisher, that publisher will complete his manuscript (apparently aloud to a room of rapt listeners), stand, and declare “Gentlemen, hats off!”

Of course, Grand is taken with the plague. And he burns all of his manuscript and notes. It is the low-point of the book. But he is given the first of a new serum, and he lives. And he continues his book.

Of course, the Doctor, the hero, who has coordinated every effort and done all he could, watches many tearful reunions after the quarantine on the town is lifted. But there will be none for him. His wife, who’d been sent away to a medical facility before the book began, has died. No tearful reunions. No life’s ambitions renewed. Just his work.

Pay attention. This is important. Listen. We’re all beat from the start. We all live under the sword. Focus on what you can and must do. Learn whatever you can while you still have time. Never burn your manuscript. Ultimately you do not know. None of us do. We may all be beat, but go down swinging.

Jessica Lakis - Writer/screenwriter. Geek & mental health blogger. Conqueror of the Useless. NERD INVICTA! END_OF_DOCUMENT_TOKEN_TO_BE_REPLACED
This entry was posted on Tuesday, January 26th, 2016 at 5:51 pm and tagged with Camus, Jessica Lakis, The Plague, winter, writing and posted in art, geek, life lessons, writing. You can follow any responses to this entry through the RSS 2.0 feed.
« JKHOA Pt. 2.2 Netflix & Plague
JKHOA Pt. 2.4 Being Other People »