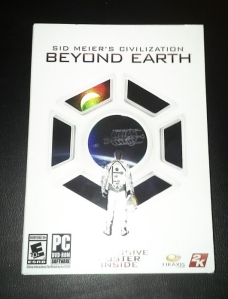 I can totally do that, Dave.

I sometimes wonder whether I study history to become a better strategy game player or play strategy games to better understand human history. (The life lessons I draw from both are another post.) But certainly one often feeds into the other, no more so than with the Sid Meier’s Civilization series. As my Steam page reminds me, I have invested 1,350 hours of the past two years of my life in Civ V alone.  And I haven’t even played the scenarios. At any rate, lover that I am of building roads with my legions as Augustus Caesar, finding that Gandhi has declared war on me, building the Parthenon, developing great works of art and literature, and spending face time with Alexander or Elizabeth I, you may well understand my initial discomfort with the concept of Beyond Earth. Moreover, as my idea of the future is Star Trek, I was disappointed with the idea of going to space just to fight humans again.  I was rather looking forward to going toe to toe with Space Rome. But when I finally realized that this  truly  is a game of exploration and new possibilities, I was hooked. (Although I am holding out for that Space Rome mod.)

After rather arbitrarily choosing one of the unfamiliar new Civs in the game and my various attributes, I made epic landfall on my new planetary home, which satisfied as much as one might expect. Then after blindly stumbling through some Virtues (Social Policies), engaging (unsuccessfully) in war against the native alien life-forms, choking some units in miasma, and getting tangled in the new Tech Web, I finally got it.

I saw my human neighbors slowly morph into cybernetically enhanced Borg-like creatures, genetically altered alien-huggers, or  more perfect humans as they aligned with the three Affinities the game offers: Supremacy, Harmony, and Purity. My units, cities and landscapes morphed with my Civ to more closely reflect the Virtues and Affinities with which I had aligned. And all the while the music varied from pulsing, space-trance, to Star Wars Imperial themed WAR DECLARED! and Dagobah mystical, to epic TNG opening credits glory.  I found myself as immersed in this future as I had ever felt in any of  my alternate pasts on Earth. I also eventually killed some aliens and cleared that miasma.

That said, most of the mechanics of the game will be familiar to previous Civ players. The main difficulty I still encounter is in the new Tech Web. Unlike the Tech Tree, the player doesn’t need to research every tech to advance. However, the benefits of researching “Bionics” or “Alien Ecology” are not as self-evident as researching “Iron Working” or “Steam Power”. Also, there simply is something less fulfilling in spending 20 turns building  a Wonder called “Prometheus” than say “The Taj Mahal”. The quotes that accompany achievements do seem both well-thought-out and humorous, while  giving insight into the back-story and evolving culture of the vision of the future this game proposes. But, alas, gone are Mark Twain, Shakespeare, et al to guide us on our road to victory.  The trade-off is launching various benefit conferring satellites in the “Orbital Layer”, which is possibly possibly possibly worth it. The “Planet Carver” sure is as vicious and awesome a weapon as it sounds.

As to Victories, Domination is still an option because, well, it’s fun for we unenlightened who are not really beyond Earth (yet). Alternately, one could return to Earth to bring colonists to your newly terraformed world, go back and annihilate/assimilate their inferior buttockses, or become one with the consciousness of the new planet. However, my personal favorite is Contact. As the name suggests, this is based on the Carl Sagan novel and involves establishing communication with the planet’s former intelligent inhabitants. Double plus points for the Sagan reference. However, the game necessarily becomes vicious by the end, and you may find yourself compelled to wipe out other Civs or conduct covert ops to undermine them, all while putting up some major defense as everyone inches closer to victory conditions.

This is by no means the end of my journey with this game. Two play throughs is nothing for a Sid Meier’s game, especially one so immersive, hypnotic, exotic and exciting. There are new challenges to meet and face, transformations to take place, mysteries to unravel, and no doubt a ton of DLC that will make this version seem like watching the theatrical release of LOTR after you’ve watched the Extended Edition. And, yeah, what Ned Stark said. And if this one is anything like the last, I plan to spend a good deal of it “Beyond Earth”.

Jessica Lakis - Writer/screenwriter. Geek & mental health blogger. Conqueror of the Useless. NERD INVICTA! END_OF_DOCUMENT_TOKEN_TO_BE_REPLACED
This entry was posted on Thursday, October 30th, 2014 at 5:46 pm and tagged with Beyond Earth, Civilization, First impressions, Gaming, Jessica Lakis, Review, Sid Meier, Strategy and posted in Civilization, gaming, geek, strategy, writing. You can follow any responses to this entry through the RSS 2.0 feed.
« The Walking Dead: This Charming Man
Tolkien: Lessons from an Amateur »